Bleky I miss the old maple 99999999999999 this chat section used to be so lively with people and trolls anyone remember the old forum memes or joke titles? I cant

Bleky Why are you still playing Maplestory? It's so obviously clear now that this game is a shell of what it used to be, even if they merged all servers into 1 it still wouldn't compare to before. The game's infrastructure itself is in shambles - why use the train, boats, planes, even VIP teleport rock, when you can teleport anywhere you want from that neat little pantheon portal, or even from the Maple Guide that teleports you to training spots. I was surprised when I saw that they still use actual NPCs in this game instead of just cramming them all into a little window just like they did with bosses and party quests. Maplestory has had a very long life but this story has a sad ending.

Bleky Here lies MapleStory Rip Glad you could make it to MapleStorys funeral, do you have any last words?

Bleky Why the hell does maplestory have so many servers? It's not like the population in any of these servers was too heavy to handle. But they just kept adding more and more. Now we have like 20 servers with like 100 people in 18 of them. Might as well merge them all and just have Scania, Bera, Khaini, Windia, and Broa.

Bleky How much Exp do you lose when dying in town? Didn't they change it to where you lost like maybe 1% or so to fight off people who kill with summoning sacks in town? Need a quick answer

Bleky Being mean at Jump Quest I took out my frustration on these two poor fellows, but what really sucked was finding out that once you finally complete the stupid jump quest, you're not given a chair, but instead a box. With pots in it.

Bleky P/c 32att superior gollux ring Can someone give me a price check on this? What about if I pass 2 scrolls after I hammer it? What about perfect ring + unique pot?

Bleky Did Nexon ever answer the most popular questions from before I remember a while ago nexon did some event where you could submit your questions and then vote on them, and the most popular ones would be guaranteed an answer. however I don't remember ever seeing a follow up on this. Did I miss it? Can anyone post a link to their answers? One of the questions had to do with GM's failing to walk through popular maps to enforce bans 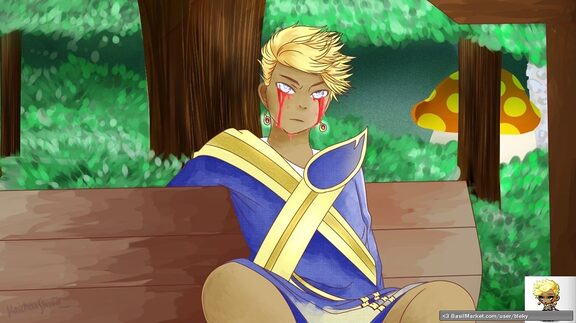 Bleky So recently I was going to quit maplestory, but after my beloved guild Perion made my poor heart ache with sorrow and farewells, I decided to come back the next day. Lol. One of our most cherished members MatchingSet was kind enough to draw a portrai

Bleky Range question, Nl I have 164 total %Luk (forgot to add in my belt's %luk), and like 500 something attack and buffed my range is like 220k.. All of my gear is fresh, clean, full amount of slots. So if I start scrolling all of my gear with attack, will I see a large increase in my range? Equips.1 - Equips.2 -

Bleky What am I able to solo with 1.2mil range? Or better question, what am I unable to solo still?