HerroDer A friend of mine wanted me to post this video here for her. Dojo as a CM with a time of 5:01, her current personal best is 4:59 (not recorded).;feature=youtu.be

HerroDer Paladin Shield/Rosary Hey everyone, Just a simple question here: Do you use a shield or a rosary? And what are the stats on your shield/rosary? I am a shield user (as seen by my basil profile), and I do not plan to switch over to using a rosary once we get the RED patch. I'm just too big a fan of shields unfortunately :3 I'll post a SS of my own shield tomorrow morning or something. Gotta get to bed now o.o

HerroDer Paladin Range thread [header]Well hello there, my Paladin friends.[/header] I recall there being something like this a while back, but I can't seem to find it. SO MIGHT AS WELL START A NEW ONE. I realize that pallies aren't exactly high damage dealers (yet), but it's still fun to do this sort of thing so we can compare, and help each other strive to improve :D [url=http://i.imgur.com/hudOZBl.jpg]My range self buffed on August 3rd, 2013.[/url] My current range at this moment with 55% str (61% with maple warrior :P). Considering what my range was earlier this year, I'm very satisfied with how my range has improved. Hopefully the DA link as well as the unique pots can help me to get stronger. September 28th, 2013: When I get the chance, I'll p

HerroDer Acb in Bellonova If anyone needs one in Bellonova, send me a PM. We can work out details there. :) And I'm aware there's a thread for this purpose. I just want the message out a bit faster.

HerroDer Are you a Ua Paladin? Title^ Asking simply out of curiosity haha :) Feel free to add why you chose to be a UA, or why you simply went the &quot;traditional&quot; path. Personally, I am not a UA. I didn't think it was worth getting a CK to 120 just to get one more attack and wear equips a little earlier. Plus, I had a level potion that took me from 30-70 in one go. o3o

HerroDer Paladin Dojo Times Hi everyone, So today, I did dojo on my character for the first time. Not the greatest time (16:45), but with some more boss%, I should be able to improve it significantly. For now though, I'd like to see where I stack up compared to my fellow Paladins and perhaps get a reference point as to what I have to improve to. Please post below how fast you dojo, and the boss% you have. Thanks in advance~ :D Update (06/19/13): So just for fun, I decided to go dojo again. Timing it a bit better than yesterday's run, I got 14:41. Decent? :o

HerroDer P/c clean Highness Assassin Hood Pulled one today from the teapots :) Any idea for the price?

HerroDer Scammer alert in BelloNova Hello everyone, So, I've created this post on behalf of (UsagiSmiles) due to a scammer in Bellonova. IGN: Retrands Guild: Tranquil Retrands was offering to sell UsagiSmiles 25k nx at a 1:55 rate for a total of 1.375b. As is typical, the transaction was mesos first. However, upon receiving and entering the code, it was revealed that the code was invalid. [url=http://i.imgur.com/rcTcpRm.jpg]Here is a screenshot of it happening[/url] Apparently, Retrands also had two vouchers, however UsagiSmiles cannot remember what their IGNs were. Tranquil Guild, I hope that you will take the right course of action to deal with Mr. Retrands. If anyone knows anymore information on Retrands and who his other characters may be, pleas 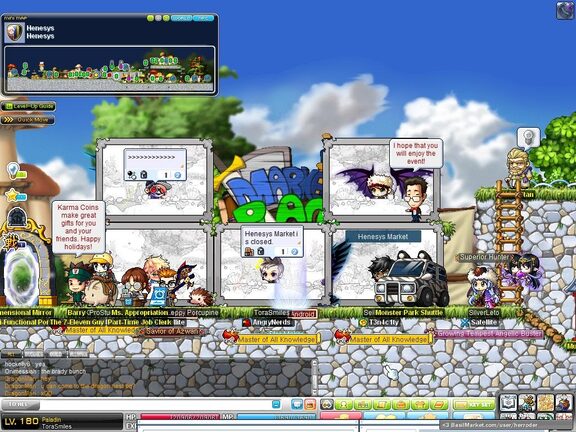 HerroDer Don't you just hate it when you're in Henesys, and you can't get to the market because there's a bunch of blocks in the way?