cb000 Heroes didn't strictly need the Reboot patch to defeat Dorothy (at least in GMS), but the 2 extra lines made it more feasible, which is why I did only practice runs until the patch. Either way, I'm happy I finally managed to clear the tower. Special thanks to my support team for getting me to 50f with plenty of time left. Just wondering, is there another Hero in GMS that has cleared Dorothy before this? Because I'm not sure if I'm the first or not.

cb000 Kms Rebalacing Part3 for Heroes Been lurking around insoya for a while, some threads crying about Ryudes nerf, but this is what I care about: Raging Blow changed so that when Enraged, it does 215% x 7, without Hyper. Source:;category=111&amp;divpage=76&amp;no=372940 On a side note, it looks like 2nd job Combo Attack gives 2 attack per orb. Edit: And apparently they patched the ability to use Enrage without any combo orbs. Source:;category=111&amp;divpage=76&amp;no=372917

cb000 Figured I might as well try to beat it instead of skipping. Didn't take as many tries as I thought it would. Wish I could record in 720p without dropping performance.

cb000 Played a bit conservatively for a deathless run. Probably could have pushed towards 200 kills if I took more risks.

cb000 Finally collected 400 coins, thought I'd record the last moments of getting the Tyrant Gloves since it took so long. Thanks to everyone who participated in the last invasion! And apologies for the 480p on Basil's huge viewer, but I have a bad computer.

cb000 Finally figured out the last two targets. Played pretty conservatively since I was running low on coins.

cb000 Star Force Simulations To prepare for Star Force and decide how much I would be spending, I wrote a simulation for the system. Thought I'd share the data here. The simulation was written on MATLAB and uses MATLAB's RNG. A new seed was obtained at each trial. The simulation would run each trial until the equipment reached the target 15 stars, constantly adding the cost for each enhancement. If the item was destroyed, it would start from 0 star but would not consider it a new trial. The simulation also recorded the average number of times the item was destroyed; since it does not add the replacement cost of the item upon destruction, you can find the real total cost by simply adding the price of the item times the average number of destructio

cb000 Warning Thanksgiving Feast Event Quest So the NPCs don't tell you what ingredients they want, and apparently they can take some valuable stuff without warning. Bye bye 335 anti-magic stones farmed over several months. If you have stuff you can't afford to lose in your inventory, don't do this quest. 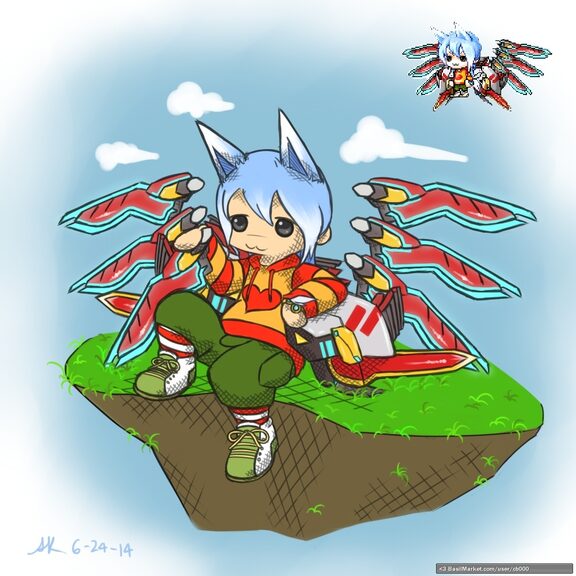 cb000 I don't draw Maple-related stuff often, so this was refreshing to work on. Just a quick giftart for Got pretty lazy with the shading, but that's all right; I got to try drawing those Gear Wings.

cb000 Full Empress Solo So by now we all know Empress Cygnus has been changed such that her healing was removed, her dark genesis is a 1hko (there is a variation that barely leaves you alive), and one of her moves is now a 50% hp attack. While she is indeed more dangerous and less forgiving of mistakes, the fact that her healing was removed greatly reduces the barrier for people without amazingly high dps and/or bind. I made a thread before asking if a Hero with ~720k buffed range, 262% boss, and 91% effective PDR could do a full solo, given that the range would be further buffed with potions, that MPE potions would be used to break the speed cap, and that survival was a non-issue. Most people were quite negative about the possibility. Now, if I

cb000 Empress Cygnus Solo Just want to know if you guys think a Hero with a ~720k self-buffed range (without Hypers/Echo), 262% boss, and 91% effective PDR can solo Empress Cygnus, assuming that during the run, MPE potions are used to raise attack speed past faster2, and with a Witch's Brew. Also assume that survival isn't too much of an issue to a certain extent (Hot Time wheels). I'd put this in the Hero forum, but I want to know what people in general think, given this information.

cb000 Physics Help I'll first give the problem [url=http://i286.photobucket.com/albums/ll92/cb000/physicshelp_zpsb649b48b.png]here[/url]. The text in green is the problem, and the stuff written in orange includes my work. I know the partition function, the Debye Temperature, and how to get the mean pressure from the partition function. I've made the integral approximation for the sum, and I've juggled some substitutions to get the integral in a form without too many extraneous constants. But when it comes down to doing the actual derivative, it seems that I have to do some calculus magic to get it in some coherent form. I'm not really a mathematician, so I'm stuck here. Anyone care to help?

cb000 Complex eigenvectors help I'm currently working on a physics problem involving six identical masses arranged in a circle, attached to each other via identical springs. My job is to find the normal modes using a symmetry matrix and its corresponding eigenvectors and eigenvalues. Since I'm working with 6 masses, I get a 6x6 symmetry matrix to fulfill the eigenvector/eigenvalue equation SA=BA, where S^6=I, which means there are six normal modes (some are complex) that I can work with. The problem is that when I tried solving for the general form of the eigenvector B, I found that the components of B (I'll denote them b) follow this fancy equation: b^6=1. I already know that this has 2 real values and 4 complex ones, but first I need to provide 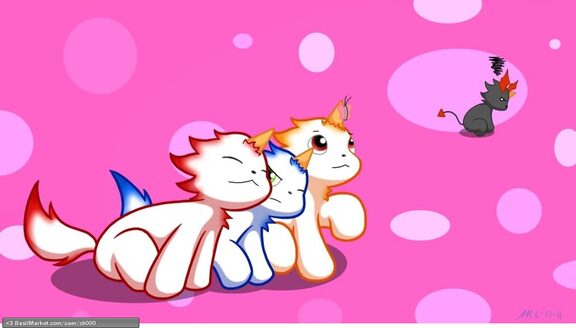 cb000 This is my first MS-related drawing. These are my favorite monsters in Maple, so...yea. I'm sorry if the lineart is a little crooked; I don't have a tablet.

cb000 Physics problem help So, this last problem on my final completely destroyed me, and it's been bugging me ever since I got back home. Can someone solve this and show me the work so my soul can be at peace? My physics professor called it a Gyroscope of Doom, by the way. Suppose there is an L-shaped rod (think half of a square's perimeter), with a side length L and total mass M. The rod is attached to the z-axis at the origin but is tilted an angle T below the xy plane, so it makes some sort of a tilted letter 'V' when viewed horizontally. At the end of the rod is a disc of radius R and mass M, which is spinning at an angular velocity w. Gravity is acting on the system's center of mass (not given). In addition, a spring of rest length 0 and sp