CoraKora The Bad, the Ugly, and Everything in Between I haven't done this is forever! Hi Basil! Post and I may sketch you! Drawing style may vary, hence the title. :p My avi is dead :'C 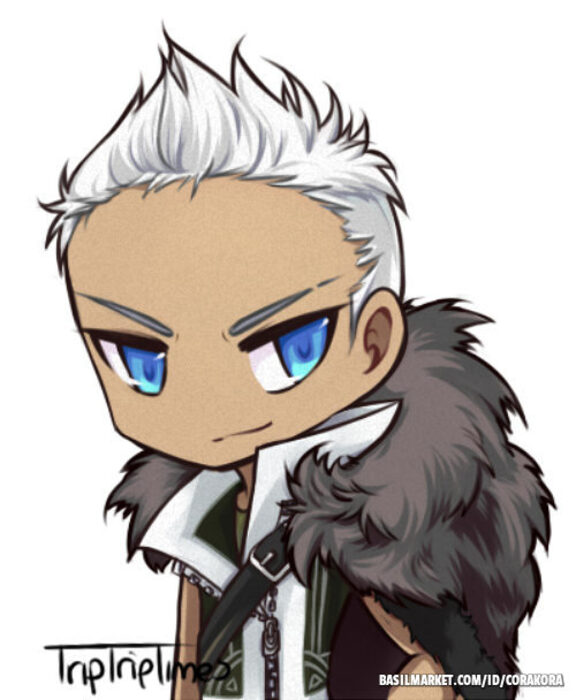 CoraKora So, about that second blockbuster. HOly shots! I know I'm super late with that news, but ahhh! I've enjoyed the first one so I can't wait for the second one! There's someone that was missing, so I tried to fill that void. I'm not too good with custom 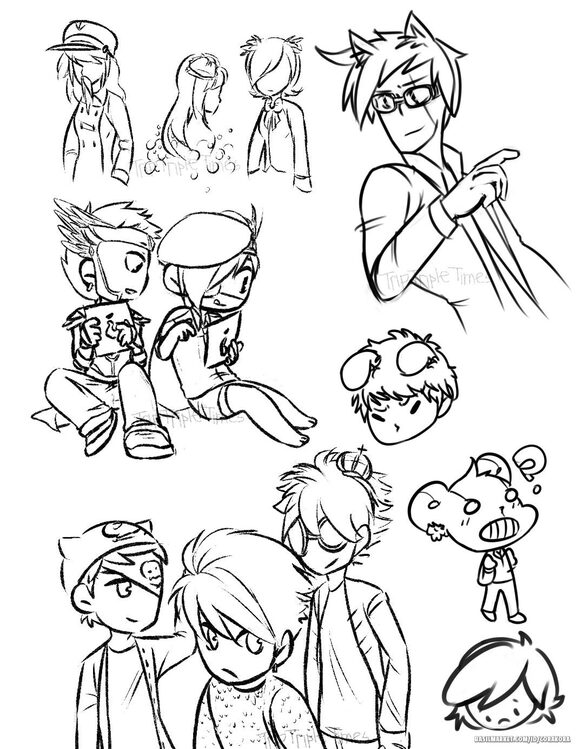 CoraKora To the peeps at [url=http://www.basilmarket.com/With-a-Pen-and-Tablet-Thread-b5BOo]the forum a while back[/url]! Sorry for draw this so late ahaha.

CoraKora With a Pen and Tablet I haven't done this in a long while and I've been rather dry with my drawings. How are you guys with the new BasilMarket layout so far? Post below and I might draw you. Edit: Gotta close the requests now! Look out for the drawing in the Screen! Thanks guys!

CoraKora Basil Halloween 2015 With the moon turned red, I think this year Hallowe'en theme should be werewolf hahaha. Draw your character turning into a monster, tearing innocent by standers, fooling around. Have fun with your monster turned character! Comment below if you want to take part of this year hallows eve event! When you are done with your image and have signed up, you can either comment with ur link or PM me the link! Last year's Hallow's event: **__Sign Up__ -Done - Done - Done - Done -Done - Done Q n A Are Traditional works allowed? Yes. Digital and Traditional are a-okay, but if anyone is doing traditionally, it is ideal that the image is clear with a good lightens. Also, no lined paper or graphed paper please. Due Date?** October 26.

CoraKora What a Lonely Hero So I just reached level 70 on my Shade just for the link skill, but wow, I feel so bad for him! Is there more to his story after level 70, or is there more than &quot;I will fight the Black Mage.&quot;? Shade is the saddest character I've played though in Maple, like wow. (Though I still need to play Xenon but I finished Black Heaven, and I think Xenon got his justice.)

CoraKora To avoid spoilers, I have censored the guy's face and then the whole body, because I can. So for a while, I have been playing though Black Heaven and really enjoyed it. There were different things thrown into this story (something new and somethings

CoraKora Am I allowed to TgtDrawings for Items here? I think this is a big questions for a lot of the artists in Basil. Trading drawings for items and mesos. I'm asking now, because my brother and I returned to MapleStory after a year long break and we need a bit of an upgrade, especially my brother, but we are dirt poor. It would be nice if I can make drawings for people who donate any good/ok items for a Bishop and/or Shadower, but because of the Basil Rule #5, I guess it is a no? If basil is not a place for this kind of things, are there other places where I might be able to? 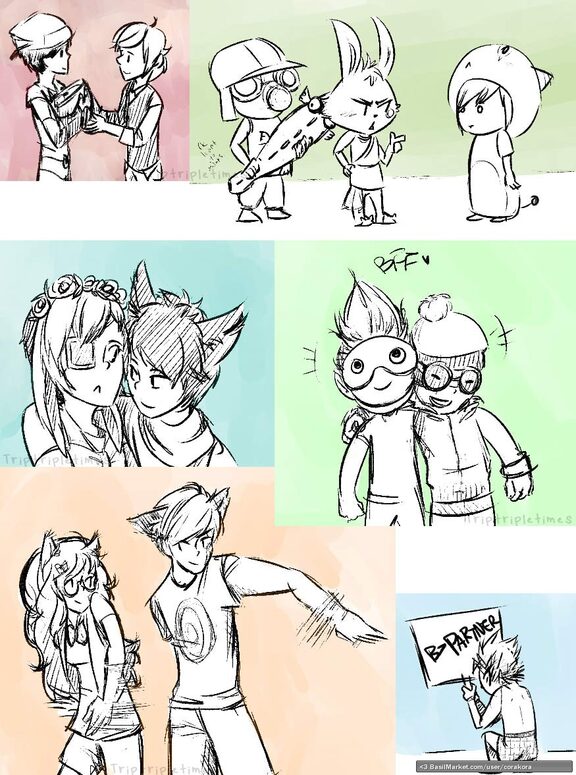 CoraKora Your tights are scaring the kids away, so I gave you pants (and shirt). Some of the drawings from [url=http://www.basilmarket.com/forum/2861219]a forum[/url] long ago. Grab a partner and swim 'em around! Make sure they're comfortable!

CoraKora Collab Brain Storming So heys. I just wanna know what kind of collabs you guys wanna do. Collabs are supposed to be an group thing, right? So it only makes sense you guys are also part of the planning too. I'm pretty sure other people want to add their ideas in the pot too. So throw them at this way! General collabs, holiday collabs, monthly collabs! We can just chat whatever about collaborations too, like what we can improve on and such, or know how to save an image as a PNG file or how to have an transparent image. Just to get the conversation going, what do you guys think of a very quick collaboration? One that only spams for 3-5 days? [s]that would surely kill some people ahaha [/s] Of course, the picture doesn't need to look good. It c

CoraKora Region looooockkkkkkk Urrgggg So long time ago a friend of my parents' from Korea gave me (or my bro, eh) a Pokemon X. At the time, we did not had a 3DS to play the game, but everything changed when the fire nati- Just kidding, just kidding. Anyways, my bro got a 3ds recently and we tried to play the Pokemon X on it. I don't think I need to finish the story. Korean 3DS game card on a North American 3DS does not work, laaaaame. We didn't knew about the region lock thing. To find out about it and unable to play the game is a huge disappointment. I was looking foward to trade a doodle for a cyndaquil. (Bro and my favorite pokemon.) Now we don't know what to do with it. Is it possible to trade the Korean game for a NA fame in EB games or in oth

CoraKora Couch Potato Collab Hey guys! Anyone wanna do a collab? It's has been forever since the last one. Since I'm not too good at hosting things, I'll just go straight to it. Like the title says, the concept of the collab is Couch Potato. There is a couch and characters will be sitting on it (Max 3-4 people, depending on the pose they're sitting) and if there is lot more ppl wanting to join, they would be placed around the couch (they can be laying down in front of the couch too). [url=http://triptripletimes.tumblr.com/image/112170263571]This is the basic idea of the project.[/url] This is suppose to be a fun, easy project. Any style is a-okay in my book. The image can be submitted as clean sketch, lineart, or even coloured. Now, to make things r

CoraKora Grab a Partner Grab a partner and do something with them! Maybe I'll take a picture for you two! I grab and [url=http://triptripletimes.tumblr.com/post/107396730181/jam-those-notes]we rock some tones![/url] [Header]Sorry Folks. Requests are now closed![/header]

CoraKora So these are the drawing I've done this year in the Basil Art Forum. I tried to look for the maple sprite for the drawing but some of the drawings are from 11 months ago and the users have changed their picture since then. Hopefully, the characters l

CoraKora Halloween Art Poll Hey guys, just a simple poll to what our halloween collab will be. The voting is open until the end of October 11, 2014, unless there is a clear winner to the poll. I guess. Here's a brief(?) description for them. (Quoting from another thread) [header][b]Screenshot Collab[/b][/header] Based on the animation series Gravity Falls season 2, episode 1. So we'll take a screenshot (or couple, depending on the amount of people joining this collab) from the animation show Gravity Falls and draw your character in place of the characters (zombie). [url=http://33.media.tumblr.com/cae1ccce01483a038963c2a0383aa196/tumblr_ncuvt3jeoI1qjd742o1_500.png]I'm not good with words, I'll just show you. Click please. [/url] So the role of the Ba