Anybody here had a really annoying death streak, followed by DC's crashes?

Today this happened to me -
I was doing the jump quest on CWK, everything went fine and smoothe, then I went into one of the caves to start hunting for stormbreaker badges, and maybe get a flamekeeper cordon in the process. Due to a lag which I didn't notice, I died. (I got hit but my HP didn't go down due to the lag, and I didn't notice)
OK, no biggie. I was like 95% so it was slightly annoying but no big deal. I get to the jump quest again, this time I make a slight mistake, and the pole kills me. OK. Since the % that goes down from the pole isn't that much, I didn't think much of it. So then, slightly annoyed and distracted I decided to go again. Being annoyed, I forgot to put magic guard. I died again at the map before the jump quest. I go.. YET AGAIN. I get to the jump quest, at which some point maplestory freezes. I have this problem where the game goes on but my software freezes. I died from the pole since I had no idea where to go. Then I went again. Crashed. Tried one last time, and crashed again.
I had then thought myself &quot;HM... maybe I shouldn't try to do it now!&quot;
So I left to try to get the quest specialist medal before the BB quest reset.

So, got similar stories?

@Srurtuphr: Like I said, I got broke towards the end.

@Cavenglok LOL. Dude you paid 5000 mesos each time back then? that was a lot!

This was before ship rides were free.

(on ship from Ellinia to Orbis)

Okay, you know what, this is sickening, how the hell do I avoid that?

Finally. I have no idea how to avoid that, though...

True story. Then I found out how to get below deck.

level 134 aran
0% goes to 60%
tries to train lags and dies
tries again combo drain runs out and i dont notice and i die
i forget to pot and i die
i got irritated and careless and died
i finally got some training done and then died
60~&gt;34%
got irritated at how i lose 24% in the total ive been training and
34%~&gt;0%

I don't understand why. o.O it's so simple. No monsters who drop, no traps. Nothing. Just moving basically. Easiest thing ever.
But yeah =) it's just that those damn badges drop once a century.

@Srurtuphr: I fail at that JQ. I've actually never made it through before. Had to rely on teles to even get my Mark of Heroism lol. Now that I think about it, I'm bad at all jqs except the 30- one in GPQ. You should still get the Mark of Heroism though, it's just amazing to fly by.

nexon doesn't give free stuff, that was ur virginity for piankillers ...

[quote=GazimoEnthra]Lol, I haven't died in several months, Dojo excluded.
But you should try getting the Mark of Heroism so you can pass the wr JQ.[/quote]

Which is why I was killing stormbreakers.
The JQ isn't all THAT hard though TBH. Don't understand why people make it to be so. It's the easiest JQ in the game IMO.
It's only hard for me when it's laggy and DCing me.

Lol, I haven't died in several months, Dojo excluded.
But you should try getting the Mark of Heroism so you can pass the wr JQ.

-As 2008 was ending, my old XP laptop was forcibly exchanged for a Vista one. It wasn't friendly with MS, it kept freezing on me whenever I trained and kept dying at gobies. I quit for nearly 5 months knowing that I wouldn't ever get to Marksman. So glad that it doesn't freeze randomly anymore~
-Kept dying at skeles during 13x and 14x...so not cool. T_T

I went to help a random mage fight dodo in ToT and i was soloing it, doing my strategy of rush/crusher as to not get hit. When i cornered it for the last few crushers so the mage could hit it, it hit me for 3.7k when my potion decided not to heal me D: I died, upset and detrmined to get my EXP back, i went to go train. I got into the map, trained for about 2% (10-15 mins) and then a lag spike hits me like a wall, and the mob i as in hits me like 5 times while i was berzerked... doing 2k per hit (zerk is 7k or less for me) and when the monsters died, so did i. Fail... Lost 20% in 30 minutes. Yay...

@Makethemutesing lol, sweet story.
@alvarez I really should have. xD
@kingpharouk you could've just made a new character, get a scroll and put it in storage.

the annoying totem pole on the way to WR. I cant remember how many times i died there due to lag, missing a jump, or just running into it 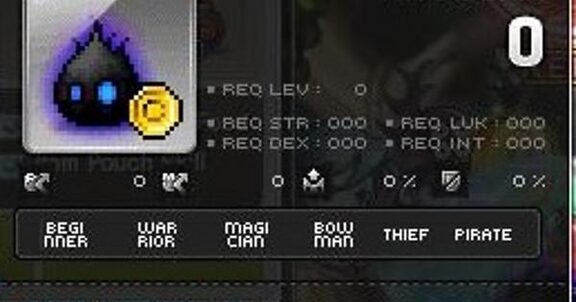