Population here is low enough, how about stop locking the threads, but after 20 days after creation date the thread will become unbumpable.

There should also be an option to subscribe or follow a thread or w/e you call it if you want to keep up with new comments in the thread. Wasn't that a thing?

@helpingly: I'm going to be sad if this comment get to frontpage because it means nothing has changed.

@helpingly: I think it's fine. I think she likes you.

Also, I love soul-food-style spinach. It's still a little bitter, though.

@beefly: I'm not a fan of spinach myself so I don't know whether that is a compliment or an insult. :o

@helpingly: you are the baby spinach in my salad bowl.

@beefly: To be honest, I like this idea a lot, and will see if it's something we can do. Also, answer is no, I'm not a mod on there. I help try to improve the site, but I don't actually do any mod'ing.

@helpingly: That's why I said to make threads "unbumpable" instead of locking them. If an old thread still allows comments but no amount of activity on the thread will bump it to the frontpage, then you should not get any complaints about reviving old threads at all (because it will still be far from the frontpage, and if the 'subscribe/follow' thread becomes a thing then only people who are interested in the thread will be notified, everyone else will be completely unaware of the activity unless they actually visit the thread multiple times).

Also I feel like if threads were left unlocked, it would give time for people who visit this site once every month to participate in a thread of their interest, instead of just looking at a locked thread and going away.

How come BZL doesn't have this issue? (Are you a mod there just wondering?)

@helpingly: Well, just imaging something like this.
1) Alright let's start a thread! Although this is quite a dead site maybe someone will reply if I give it some time.
2) Two weeks later.
3) Potential commentor who could only online once in a while since he's grown up or some other reason : Oh, this thread look interesting...what? Locked? Okay...I guess I'll just go somewhere else.
4) Thread starter : What? Locked? Guess this dead site just want to save some space...might as well go to somewhere else and post my stuffs anyway. Oh I can ask a mod to unlock it? But why? Why do all these hassle things when the other option don't have these?

Not to say this is the main reason that this site is becoming a desolated place but...this surely will contribute.

@helpingly: Well, it's hard to get requests for certain threads to be unlocked if the people aren't around to request them, judging by overall forum activity.

Then the other issue, after unlocking the threads, is being able to drum up some kind of discussion that justifies it being unlocked. For example, I could request that the Beginner Accomplishments thread ([url=http://www.basilmarket.com/Post-your-Beginner-Announcements-Thread-b0GBe-1]here[/url]) be unlocked, because it would be nice to have some outlet for perma beginners (and other related classes) to talk about things beginner-related, but I could see that thread go on for long periods of time without anyone saying anything - just simply because it's not like there are that many perma beginners and etc. on this forum today who have something to say, and also because newer people are probably not going to be aware of such a thread if there hasn't been any discussion going on for a while.

@beefly @animus: Well after no reply for two whole weeks we figured the thread is probably as good as dead. There are certain threads that definitely should not generate much discussion, and others that, as you suggest, might benefit more from a longer extension. That being said, I feel like 2 weeks is more than a good enough minimum. I don't get many requests for threads to be unlocked, only the VGM thread, and because of that I feel like most people don't really have threads they really want to unlock. If more people were giving us an idea of what threads they want unlocked we would be happy to change things, but so far the only thing we have is requests to increase the duration and no actual threads as examples.

Don't get me wrong, I'm all about increased activity, but in order to have that you need active communication, and if there has been no active communication in more than 2 weeks, I'm not sure that a conversation really exists there anymore. I'm more than happy to ask for a change in the system, but you have to keep in mind that the system was put in place because people were complaining about people bumping old threads. We got a lot more complaints about people bumping old threads than we are getting people asking us to revive them, so from that perspective this seems to be an improvement. Like I said, I'll ask about the matter and see what the others think about it.

@readers: Guess you're right about BasilMarket's core. I meant, there's literally a Market word in it...which is quite an irony when there's no longer an auction section anymore but a "Story" substitute with hashtags to do your sale and purchases.

Aside from that I agree to most of what you've said, mostly about the activeness across the platforms. But still...it sucks to see BasilMarket to be like this.

@animus: Oh lol, then in that case your post makes a lot of sense.

I wasn't saying that MapleStory itself is dead, but it definitely is not at the height of its popularity anymore. Even Reddit itself, as active as it is, isn't as active as if you were to combine the activity of all the old forums in their prime (BasilMarket, Sleepywood, Hidden Street, MapleTip, then later on Southperry as well, etc.). It says something when Reddit is the only public, active and easily accessible place where you can discuss anything MapleStory related. Discord can act as that too, but that really depends - and even then I still don't think it compares.

Yeah, I think the revamp really drove off a lot of people away from the site. Older people are leaving BasilMarket, but newer ones are not coming in as much (and the newer people are often folks who are returning to the game after x amount of years, not actual newcomers to the game - see the numerous threads you'll hear on that every once in a while).

I wasn't a very active poster back then, but I definitely remember those old times of BasilMarket. The auction activity was the backbone of the site, and that alone (in my opinion, anyways - you can disagree) was what drove a lot of forum activity. Without that core identity, it probably would have been harder for BasilMarket to distinguish itself, and people probably might have congregated elsewhere (as they once did with Sleepywood, Southperry, etc.). But of course I can't deny that the forum activity played a huge part - and now that that's gone, there isn't much else left.

@readers: That's my point...I don't understand why would they want to lock threads on an already dead forum. Like what kind of detrimental or beneficial effect would they get from locking or not locking the threads in a period of two weeks?

To be fair Reddit still has a healthy amount of posts daily...so it's rather unfair to say that no one play MapleStory anymore. It's more like BasilMarket itself has done stuffs it shouldn't have done to drove off the users. Sure, the current meta where Reddit and Discord are the to go social gaming platforms somewhat split the users but it shouldn't be this dead giving its used-to-have charm where it was a dedicated fan site. To be fair I still see healthier discussion over SouthPerry today, as in if you're to post a legit discussion, people do discuss about it, and it hasn't done any "revamp" to its site. While it's true that BasilMarket was primarily an auction site but you can't really deny that the discussion about MapleStory, or hell, even the good old Chat Island was pretty active back then. Hell, I remember a simple riddle thread could reached 8th page of comment or so.

I blame the jews

@animus: But the forum is mostly dead... you could set it so that the threads would never be locked, anyone can bump anything at any time, and it'd still be dead. People aren't posting on threads about MapleStory that are from years ago, let alone months.

Since BasilMarket is so heavily tied to MapleStory, if people are not playing MapleStory, then people will not use BasilMarket. The primary functionality of BasilMarket was already abolished when MapleStory decided to implement the Auction House.

@animus: It's the former, as you can tell from the amount of "go to BZL" you see here.

@helpingly, Why two weeks? What are you so afraid of if threads are not locked after a mere two weeks? What could you possibly gain as benefit if the thread is locked after a mere two weeks? What's so special about two weeks? Is it a curse in BasilMarket? Why not at least 3 months? All of us know that MapleStory doesn't has the population it used to have and BasilMarket is no longer the "go to website" anymore since there's Reddit and countless bad decisions that had shoo away the old users or it's just the old users getting done with MapleStory. Well...you get it. Sometimes I'm confused on whether if you guys just wish BasilMarket to die sooner or you guys simply don't have a clue on how to maintain a forum.

@helpingly: it seems like a hassle to wait for mods to unlock threads, just keep them unlocked.

bumping should stop to prevent reviving 2011 threads that are no longer relevant, or keeping the same threads from flooding the frontpage for too long to be fair to those who are not interested (and add the follow/subscribe button for those who are). I'm pretty sure that was the entire point of locking threads in the first place.

unlock all of them

Currently a thread should be unlocked for 2 weeks since the last post. If a thread hasn't been commented in for 2 weeks we figure the thread might as well be dead.

What I'm curious about is why you think people shouldn't be able to bump threads? It's not like one person can keep a thread going by themselves so threads that are still around are probably still generating some form of discussion.

Also, if there is a thread you want unlocked you could always just message me and I'll try to unlock it as soon as possible.

@shiraokajinja: how Japanese are you?

With the low population, it probably became too expensive to maintain the previous database schema due to decreasing ad revenue. 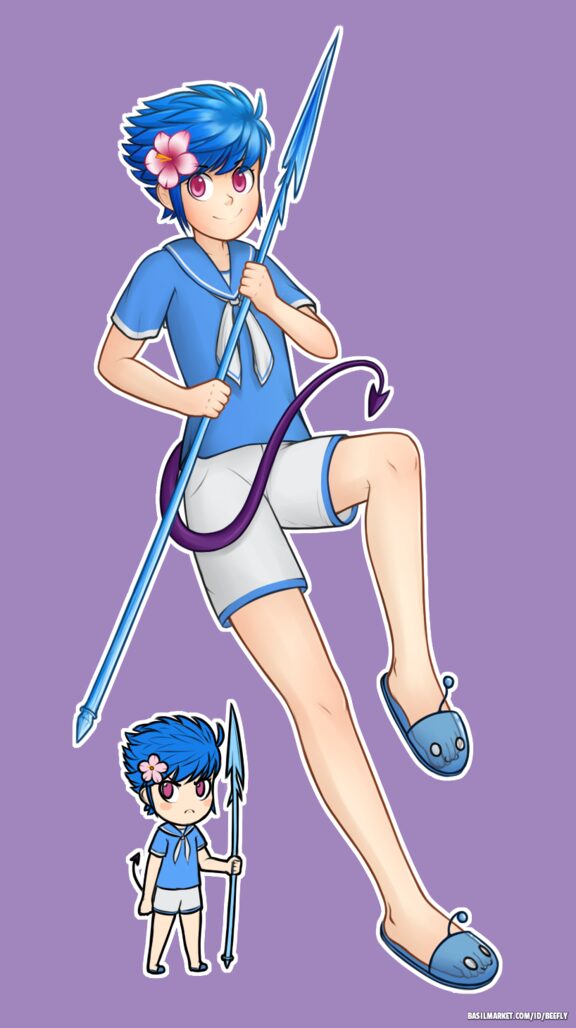 It's :) Requested to post in Basil, as I now post my artworks on BZL. So this is probably my last one here. 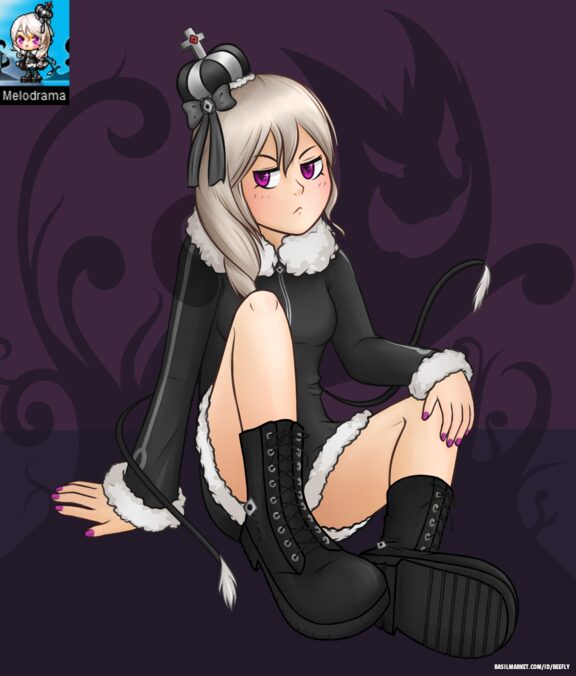 Drawing for Thanks for the help :)

Make sure you wave back. (I'm no good with names, so I'll just use Imgur URLs from now on.)