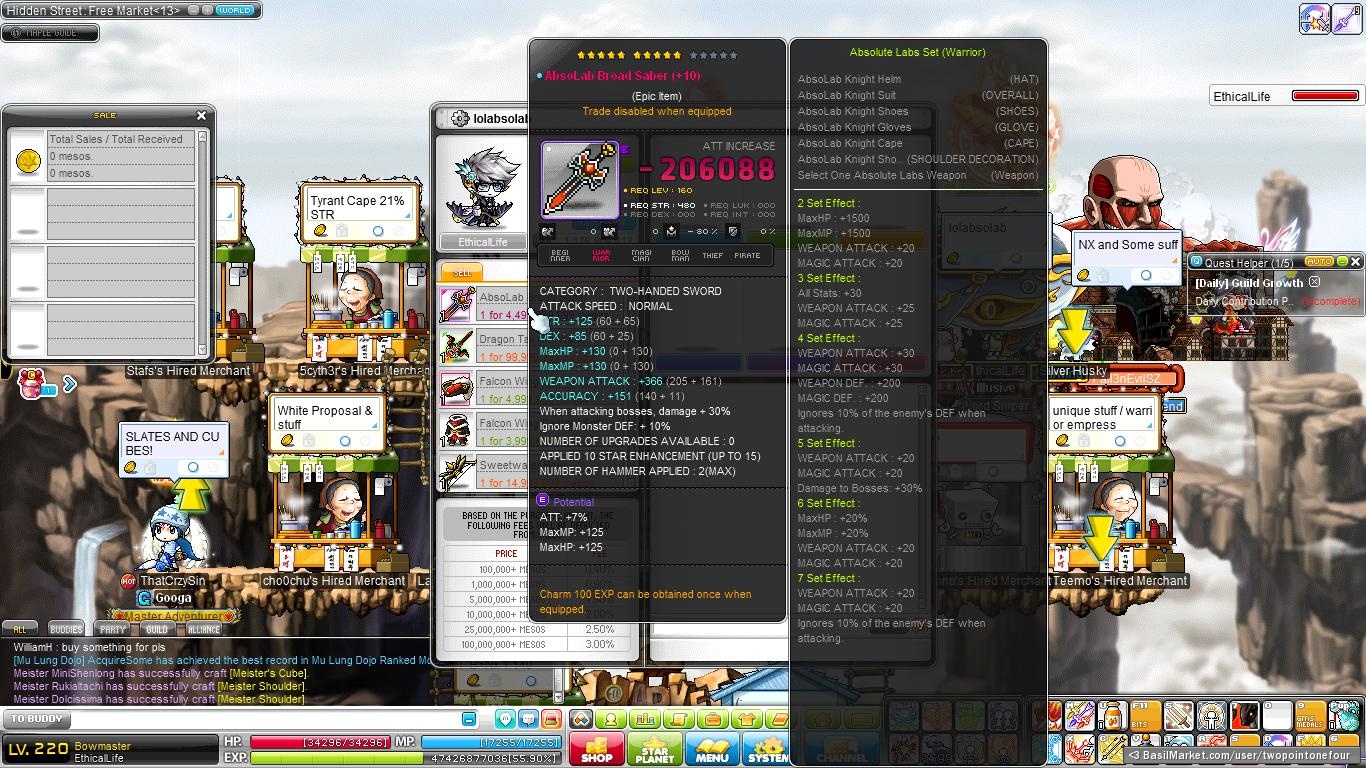 Absolabs is the absolute worst idea for a set upgrade. I really don't see anyone jumping on the toads hammer item either. Why would you upgrade your fafnir and lose the potential tier? Terrible item. I really don't know what they were thinking with Absolabs set. I mean it makes some sense being in KMS where you can enhance to 25 stars but I don't think stars 16~25 beat tyrant gear or even MEE's.

So in the end I'm probably going to be stuck selling this sword for a year.

well during the release of 5th job in KMS, there be a new set of gears called arcane

I would actually consider buying it if it were primed and not spell traced -.-

[quote=betaboi101]If it was primed and not replaceable by something like the ryudes sword, easy money &lt;3

Though its more riskier to enhance it with mesos than no booms via starforce cause after 11th star cause say it booms to item trace it you would either have to go farm at haven for the a rank a cores if you can't kill normal lotus or keep doing daily to get enough cores for coins to get a new one to item trace it. Though the cost of scrolling a full set compared to cra isn't worth the cost(the benefit of the set does not outweigh the tyrant gear). Though in looks alone would actually either of bought it to anvil a weapon to look like if I had the mesos+was in the same server

If it was primed and not replaceable by something like the ryudes sword, easy money &lt;3

I would buy it, but not for that price lol

Imagine a world with no potentials, then think about that set effect versus CRA set effect lol.

As far as the set is concerned it's a poor idea but using the weapon alone may not be. You lose the 30% boss set effect from 4 piece root abyss and gain a potential tier and 40 atk clean (on average, some weps are a bit closer). Depending on how much boss% vs. att% you have it may actually be beneficial to make the upgrade to an absolab wep, that being said it's a lot of work for likely not a whole lot of gain in the end. They certainly look neat though.

Wow, this is a prime example of how NOT to advertise your sale...
&quot;HI GUYS WELCOME TO MY STORE, THIS MAIN ATTRACTION OF OURS IS GARBAGE, WE WILL ROFLCOPTERLMAO IF YOU BUY THIS SACK OF HORSE MANURE&quot;

..why do you even have that enhanced/scrolled?